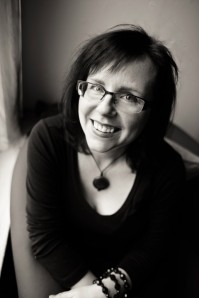 I write because the grief I carry in my body from all the years and from my mother’s body needs to come out someplace.  I’m mining the depths of experience, an archeologist of a story I’ve lived a thousand times.

I write because, at most other times in my life, I feel uninteresting, uninformed, without direction, but when I write, I feel powerful, full of possibility.

I write because my head cocks from one side to the other as I transition my thoughts from one phrase or paragraph to the next—a small physical manifestation of greater transitions to be made.  A turn of phrase can mean turning a corner.

I write because Jo Carson is no longer in this world to do it for us, and when I put my fingers on my keyboard and close my eyes, I can still remember sitting next to her, on the side of her bed, eating fruit and discussing the health benefits of pectin.

BIO:  Shannon M. Turner is Manager of Programs & Services at Alternate ROOTS. She has been on staff since May 2009. Having lived in Blacksburg, VA for ten years, Shannon was wrapping up her MFA at Virginia Tech when the tragic shootings occurred there in 2007. She worked in the Blacksburg community for a year following the tragedy to spearhead an organization called HERE: Honoring Experiences, Reflections, and Expressions. HERE’s goals were to facilitate artistic response and public dialogue toward the community’s healing. She published an article on the Community Arts Network, about the year-long journey with HERE, which culminated with a multidisciplinary arts observance of the one-year anniversary of the shootings. Prior to her graduate work, she worked for five years for the YMCA at Virginia Tech in multiple roles including Director of Student Programs and Interim Executive Director. Shannon received a B.A. from Emory & Henry College in English literature and Women’s Studies in 1997.

3 thoughts on “Shannon Turner writes because….”